Places in the South West Algarve

Vila do Bispo
For numerous centuries this town was known as the Aldeia do Bispo, or the Village of the Bishop. The Bishop in question was the Bishop of Silves, within whose diocese it lies.
It is part of the 'Sacred Promontory' since ancient times, as is shown by the stone Menhirs, and Bronze Age cyst burials just to the south of the town.

After the Great Earthquake (1st November 1755) only one house was left standing. Amongst the ruins that were restored stands the parish church of Santa Maria, with its pre-tremor Manuelin doorway (16th Century), and magnificent baroque interior (18th Century).

No one has been able to work out where the Templo do Corvo, the Temple of the Ravens, was situated, other than being within the Sacred Promontory. This was the resting place of St. Vincent, martyred in 304 A.D., when his body was carried here by his followers. For many centuries it was a place of pilgrimage, said to have even rivalled Santiago do Compostela! As well as Christian pilgrims, Islamic pilgrims also visited the site, when the Moors controlled the area. A group of religious fanatics completely destroyed the chapel towards the end of the Arab occupation. In 1173, when the bones were rediscovered by two old monks, the remains were taken to Lisbon by sea, and St.Vincent adopted as patron saint of that city. The ravens were said to accompany the body of the saint on this journey, which is why the birds are incorporated in the heraldic arms of Lisbon. 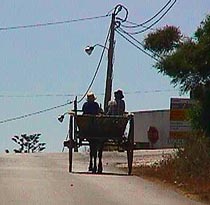 On the old road at Vila do Bispo

Sagres
The name Sagres is derived from the Latin Promentorum Sacrum, or the Sacred Promontory. Even before the Romans, this area was considered to be sacred.
However, Sagres rose to fame when Prince Henry the Navigator chose this somewhat bleak and windswept place to establish his Vila do Infante, or Town of the Prince. Although there is little evidence to support the theory, it is thought that he established a school for navigators on the southern peninsula. Here, within the remains of the 17th Century fort, can be seen the enigmatic wind-rose, whose purpose is unclear, and the church of Santa Maria, both of which are connected with Prince Henry.

The Vila do Infante was never a popular town, and many of the original settlers in this remote location were serving out sentences of exile. When Prince Henry died, in 1460, there was little incentive for them to remain, and the town declined to such an extent that the population had to travel the 10 kilometres to Vila do Bispo to hear Mass. Its name reverted to that of Sagres.
Now, with a Pousada, several hotels and numerous guest-houses, this town is favoured by tourists who come for its associations with Prince Henry, its fishing harbour, its small beaches, its dramatic cliffs and desolate scenery.

Beliche
The site of one more of the chain of little forts that guarded the coastline against pirates and corsairs in the 17th Century. Within is a tiny chapel and a restaurant.

Cape St. Vincent
Believed to be the End of the World, until the discovery and European colonisation of the Americas, this is where the cliffs of the most South-westerly point of Europe jut into the Atlantic Ocean.
From the Phoenicians rounding the cape to head north for the tin islands, to Sir Francis Drake, heading east to Cadiz, to modern-day yachtsmen, tankers and freighters, this was and still is an important navigational reference point.

Several sea-battles have been fought within sight of these cliffs, and the English Admiral, Jervis, received his title, Lord St. Vincent, after his great naval victory here.